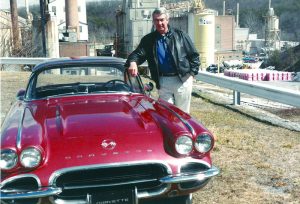 He was a member of Mt. Pleasant United Methodist Church and was active with Habitat, a Methodist mission organization. Gates was a graduate of Oceana High School, Oceana, Va., and earned a Bachelor of Science degree in engineering from Virginia Military Institute in Lexington, Va. He retired after 39 years of service as an engineering manager with U.S. Silica, where he received the Chairman’s Award.

He served as a Seaman Recruit with the U.S. Coast Guard and as a Second Lieutenant with the U.S. Army Reserves. Gates was a member of Webster B. Harrison American Legion Post #26 in Hancock, Md., the American Society of Civil Engineers, the Professional Engineering Society of W.Va., and The Woods Antique Car Club. He enjoyed rebuilding Corvettes and he collected grandfather clocks.

Gates is survived by his wife, Janice Carol McCoy Sykes, at home; his children, Mark Dennis Sykes and his wife Kim of Centreville, Va., and Laurie Sykes Dunham and her husband Richard of Leesburg, Va.; his stepchildren, Janice Lorraine Thompson and her husband Ted and Sarita Elaine Bowers and her husband Dave, all of Berkeley Springs; his brother, William King Sykes and his wife Lois of Inverness, Fla.; two grandchildren, Gates Dunham of Leesburg, Va., and Abigail Megan Sykes of Canberra, Australia; four step grandchildren, Keith Bowers and Jacqueline Garman, both of Berkeley Springs, Kenny Bowers and Kelly Bowers, both of Hedgesville, W.Va.; one nephew, Bryan Sykes of Tampa, Fla., and eight step great grandchildren.

In addition to his parents, he was preceded in death by his first wife, Sally Applegate Sykes on January 30, 1994, and one grandson, Benjamin Gates Sykes.