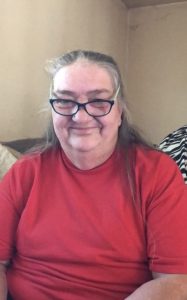 Born July 15, 1963 in Olney, Md., she was the daughter of Helen Marie Beach Schwartzbeck of Berkeley Springs, W.Va. and the late James Levi Schwartzbeck, Sr.

She was of the Protestant faith. Sue was a graduate of Rockville High School. She worked as a secretary with Don Hoffactor’s Air Conditioning and Heating in Germantown, Md. and as a clerk with Walmart and Macy’s.

She loved to play games on her phone and was totally into preparations and decorating for all holidays.

In addition to her father, she was preceded in death by one son, Robert Joseph Adkins.